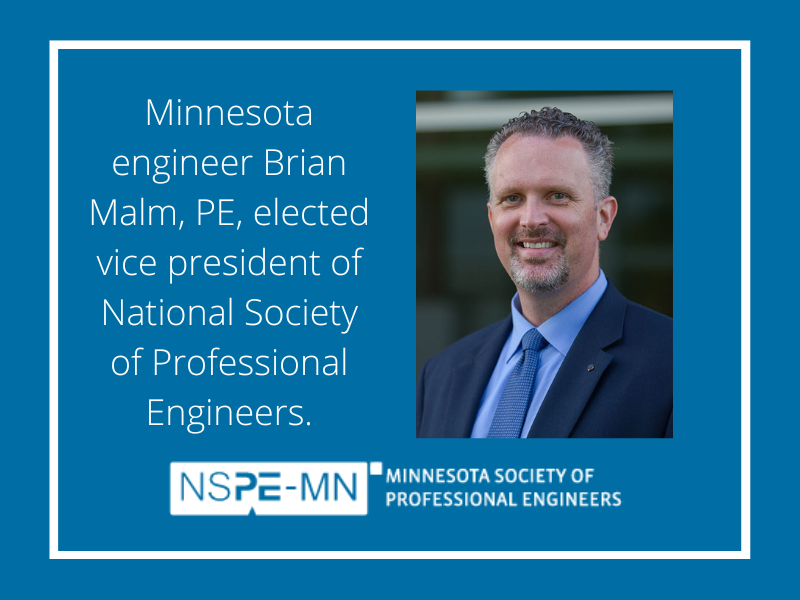 Minnesotan Brian Malm, PE, F.NSP, has just been elected vice-president of the 26,000-member National Society of Professional Engineers (NSPE). Malm, like all NSPE vice-presidents, will advance to the organization’s president-elect and then presidency.

Brian began his career in the planning, design, and construction of public works projects in 1996 and helped the Minnesota-based engineering firm, Bolton & Menk, open its Rochester location in 2012. He oversees the Rochester Civil Work Group and currently serves as city engineer for several cities in southeast Minnesota. Brian takes pride in communicating efficiently with everyone he works with. Whether it be at meetings, face-to-face, on the phone, or via email, he loves the fact that he can interact with so many different people throughout his day

Brian, like other licensed professional engineers across the country, holds the safety, health, and welfare of the public as his paramount goal. Licensed professional engineers must complete a four-year college degree, then work under a Professional Engineer for at least four years. They must pass two intensive competency exams and earn a license from their state’s licensure board. PEs must continually maintain and improve their skills throughout their careers to maintain their licenses. In Minnesota, PEs must complete at least 24 hours of continuing education every two years in order to keep their licenses.